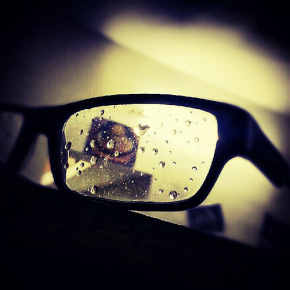 Vinoth Chandar, ‘It Rained…â€™ (www.flickr.com). Used under a CC License

Half of the PhD students in the UK are international: the university system here couldnâ€™t survive without them. If you ask British or international students what is the best thing about studying here, one of the top points is the diversity of the people you meet and all you can learn from them. But what is it really like being an international student in the UK - is it the same for everyone? And is the weather here really that bad?

Being British myself, I had to ask some friends. It didnâ€™t take long to gather folk from all over the world - Hong Kong, Syria, Hungary, Poland, Palestine, the US, Austria and Singapore. It was generally agreed that the British weather is terrible.

It was also agreed that the UK is a pretty good place to do a PhD. Since the university system is taking a battering at the moment, I wasnâ€™t sure how positive people would be about it, but there was a consensus that there is a great academic environment, good quality education and decent facilities and funding. It does, however, depend on where youâ€™ve come from: in rating the organisation and efficiency of the UK system, those fromÂ Eastern Europe felt it was good - in comparison with Hong Kong, China and Singapore, the UK doesnâ€™t rate so well.

So letâ€™s take a closer look.

The UK may be small, but we have many many regional accents. Everyone might speak the Queenâ€™s English on TV, but it really is only the Queen who speaks that way, and especially accents from Scotland, Ireland, the north of England, Wales or the south-west (so basically everywhere), can be tricky to understand even for native English speakers. Honestly though, no one will mind if you ask them to speak more slowly.

Speaking - or writing - English in an academic context is another kettle of fish (as we say. I have no idea why). Expressing your ideas confidently in a seminar is no easy matter when English is not your first language, and Iâ€™m not surprised to hear that this can be intimidating. You often donâ€™t have time to think through what you want to say before the discussion moves on, so it takes practice. One useful piece of advice that a friend was given is to remember that people are often talking rubbish even when it sounds impressive, so donâ€™t be afraid to add your view.

There are always academic writing classes open to international students, and although these can be very helpful, they tend to have students of all abilities - some who struggle with basic English and others who just need to polish up their essay style. But your supervisor, other staff or fellow students will usually have some tips, and there are private tutors and proofreaders like The Gradgrind who can help as well. Finally, if youâ€™re not sure of something, always ask and always Google. There are plenty of university-related words that British people are unsure of as well - anyone know what a registrar actually is? - and this is another area where the universities need to improve.

Names are another tricky point. Iâ€™ve heard stories of people getting stuck with their name switched back-to-front or cut in half by university email services, have their name mispronounced throughout their PhD or finding themselves going by a completely different name to the one they have at home. Iâ€™m sad to say that the British are not great at adapting their pronunciation to other languages, but if you tell people straight away exactly what you want to be called, they will respect that. Universities are slowly starting to improve as well, some of them now asking for details on name and pronunciation when you apply or for graduation ceremonies. But you may have to be patient andÂ keep explaining what you are actually called.

The UK PhD is short and sweet - well, itâ€™s short. This can be part of its appeal, since you can get your doctorate and enter the job market in three years, whereas in the US it takes six. Thereâ€™s a big however, though: you are likely to be much less prepared for the academic job market than those coming out of the American system, who have had twice as long to teach, publish, network and hone application skills. It is also a real problem in the UK that PhD supervisors are almost never any good at helping you find a job - you have to be prepared to be cut loose in the wilderness at the end of your PhD, and three years doesnâ€™t give you much time to learn. If you are prepared for this, though, then there is no reason why you wonâ€™t do well. So be warned: itâ€™s all up to you.

Having to take complete responsibility for your own PhD and career is also one of the advantages of the UK system. You have space to breathe, to pursue what interests you and organise your life how you please. This is more true in the humanities, where a PhD is usually the studentâ€™s individual project, than in the sciences where you are likely to be part of a team, but it remains generally true. You have to want this independence though, or you may find the UK PhD a bewildering and disappointing experience.

The UK is still holding onto its reputation for world-class university education, so a PhD from here should set you up fairly well for wherever you go afterwards. And since your supervisor wonâ€™t care what you do, it pays to be willing to travel the world and follow every opportunity. In Europe PhDs often have closer supervision, and although this has huge advantages, Iâ€™ve been told that supervisors can be looking for a disciple, someone to work endlessly on their project for them. And although I was surprised to hear it, apparently the UK academic job market is less nepotistic than many others - it does matter who you know, but what matters more is to work really hard. And publish as much as is humanly possible.

There is, however, far too much exploitation of hourly-paid teachers here, like the adjunct situation in the US. Weâ€™ll be discussing this more in future articles (there is a LOT to say), but this kind of teaching is a trap: vital for getting experience when doing your PhD, but too easy to get stuck in once youâ€™ve finished, as you try to stay in academia while applying for jobs - but new jobs are not being created because hourly-paid staff are doing all the teaching. As I said, weâ€™ll talk more about this, but the main thing is to be aware of the dangers and put together a clear strategy for dealing with them.

I confess that I was astonished to hear that in many countries going out for a drink is not the main social activity, but my astonishment shows you just how important it is here. We go to the pub. You do not have to drink beer, and if you donâ€™t drink alcohol you may get looks of surprise from British folk, but donâ€™t worry about that. We have a reputation for drinking.

I was also a bit alarmed to hear that even when you have gone to the pub, chatted to people and had a good time, you may say hello to one of these (British) people the next day and get ignored. I think Iâ€™ve probably done this without realising. Take pity on us, weâ€™re often just reserved, and not sure if weâ€™ve got to know you well enough to chat in the light of day. That sounds ridiculous even to me, but honestly - donâ€™t be offended, itâ€™s never personal. Just make the first move and keep chatting. Itâ€™s always appreciated.

But what has been your experience? Tell usÂ what you love (or hate) about being an international student in the UK. And if you would like to write an article about your story, email me at Linda[at]thegradgrind[dot]com.

2 thoughts on “Into the Rain: The International Student Experience”