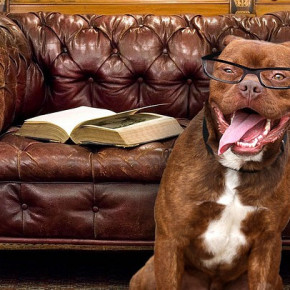 So you’re doing a PhD - or maybe you’ve just finished one - and all you hear is how terrible the academic job market is now. Hundreds of highly qualified people applying for each nine-month part-time teaching fellowship, salaries dropping, more PhD graduates and fewer new jobs. Your supervisor might tell you that actually there are jobs, and you just have to publish enough, network enough, send in enough applications and you’ll be fine. But what is the situation really? Is there a job for you or not?

The reason that this whole discussion is so vague is simply that very little research has been done into the academic job market and how well PhD graduates fare in it. In the UK, the Higher Education Statistics Agency (HESA) only started collecting data on PhD students in 2003, with its Destinations of Leavers from Higher Education (DLHE) survey. Even now, it is true that “compared with the undergraduate sector, postgraduate students in general, and research students in particular, remain a relatively unresearched group” (Park, 7). Everything I read in researching this article began with the same caveat: there just isn’t enough information on the PhD and those who undertake it. And that is why The Gradgrind exists, to offer concrete information and solid advice, two things sadly lacking in the PhD world.

So, first up: how many PhD graduates are there each year, and how many of them get academic jobs? How many get non-academic jobs? And how does each career path tend to work out?

We’ll start with the bad news (it gets better, I promise). There are indeed far more PhD graduates than there are academic jobs each year. Just over 15,000 people graduate with PhDs in the UK each year, a number which has been steadily rising for at least a decade.

Half of these graduates are from the UK, half are international - since 60% of the international students leave the UK two years after graduating, the research into graduate employment usually covers UK folk only. So the data is incomplete from the beginning, but we do have a decent picture of the UK jobs market.

Now, the bit you really want to know: half of the PhD graduates surveyed by HESA end up in academic positions.

Actually it’s slightly less than half, but that seemed too scary to put in bold. This figure remains broadly true for several years after graduation, and is also true for more recent data than that in the graph below. However, recent data is harder to find, less complete and not as well-presented as this: 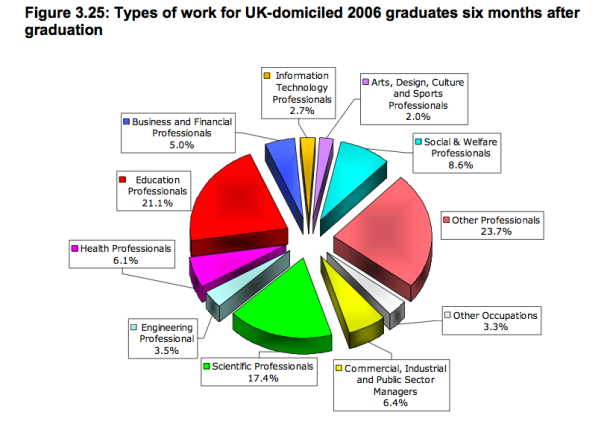 As you and I know, these ‘other’ researchers are almost certainly PhD graduates scraping by on hourly-paid teaching while working on unpaid research and job applications. Or, as we call it in my circle, the ‘post-PhD wilderness’. I wonder how many of the people who identified themselves as education professionals are actually in the wilderness too. These questions should make us cautious of the figures, using them as a guideline rather than an absolute.

The longitudinal studies that are finally starting to appear offer some more specific number-crunching for long-term employment, and even better, they are broken down by discipline (though not every discipline has been covered yet):

The Arts and Humanities Research Council (AHRC) commissioned a study in 2006 of AHRC-funded PhD graduates, 6-9 years after graduating. 74% were working in higher education institutions. Of these, 48% had a permanent lecturing position, 20% were on fixed-term academic contracts and 7% held post-doc positions. I guess the other 25% were either doing admin/managerial jobs or, again, were in the hourly-paid wilderness. And these are the AHRC-funded graduates: what of those who funded themselves?

The sciences tend to have a different dynamic, since there are post-PhD routes into industry that don’t exist for arts and humanities students. According to a 2003 study commissioned by the Particle Physics and Astronomy Research Council, of those who had completed their PhDs 4-6 years previously 35% were academics. From that group, 17% held permanent positions and two thirds held post-docs or research fellowships. The trend towards fixed-term positions over permanent is particularly clear here.

Finally, an even more niche study - of social anthropology PhDs - commissioned by the Economic and Social Research Council (ESRC) showed that 44% were academics, with just under half of those on permanent contracts.

So of those who work in academia, between 20-50% hold permanent positions 5-10 years after graduating.

We knew academia was a tough road, and I think these figures tend to confirm the anecdotal evidence. It’s a long, hard slog to get that permanent lecturing job, but it is by no means impossible. After all, you are not competing with all 15,000 people graduating in your year.

Not every PhD graduate wants to be an academic. Data does not yet distinguish between traditional PhDs and Professional PhDs - which are designed for progression in a specific non-academic career - and plenty of people return to careers they had before starting the PhD, or are retired, or decide that they would prefer the job security, reasonable hours and higher wages that are offered by non-academic careers.

Although those in non-academic careers are often motivated to leave academia by “negative perceptions of HE [higher education], rather than positive perceptions of other sectors” (Raddon and Sung, 22), this attitude quickly changes.

Raddon and Sung write that “those in non-academic jobs showed higher levels of satisfaction than those in academic jobs on most indicators, particularly in job security and promotion” (27). They continue with the interesting finding that “the job satisfaction of those in the private sector is likely to rise over time, whilst it is likely to decline for those in HE” (28). This is not a hard fact, since data is limited, but it sounds plausible enough to me. I mean, how many happy academics do you know?

It seems that no single post-PhD route is superior to the others. Job satisfaction is reported as being pretty high in every study I looked at, for both academic and non-academic jobs, and the PhD seems to offer good returns in every career path. “None of these findings is consistent with the view that those in non-academic jobs are ‘frustrated academics’. On the contrary, they appear to be making good use of their skills and training in these jobs and deriving significant benefits from so doing” (Elias et al, 11).

Surprisingly, I think that we can draw a lot of positivity from all of this: academic jobs are in short supply but they are most certainly there, while if you take a different route you are very likely to do well. PhD graduates have a high employment rate and strong average earnings across the board - the PhD will not be wasted, whatever you do.

Raddon, Arwen and Johnny Sung. The Career Choices and Impact of PhD Graduates in the UK: A Synthesis Review. Leicester: Economic and Social Research Council (ESRC), 2009.

5 thoughts on “Is Academia Really in Such a Mess?”