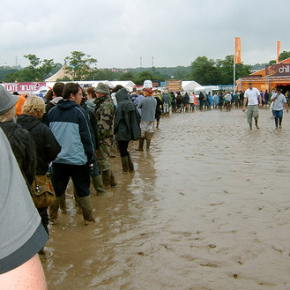 One of the most enlightening lessons I have learned through knowing international students is that many things I thought were normal are in fact peculiarly British, and actually quite peculiar. So this Guide to the British is as much for the Brits as it is for anyone coming from elsewhere and baffled by our strange behaviour. Here are some things worth knowing:

Queueing, obviously. Some stereotypes exist for good reason, and a surefire way to alienate people in Britain is to push into a queue. We might be too polite to say anything, but we can glare for hours if necessary. I think queuing is one of our better customs, but it doesn’t serve me well in other countries, where I find myself without the skills to push to the front of a crowd.

Politeness. This is another well-known one of which I also approve. It is very simple, and it makes people happy: just smile, and always say please and thank you. At least, it is simple in theory, but you have to learn how to decode its passive-aggressive side. Someone may say “that’s nice,” or “that’s interesting,” (notoriously overused terms) but look for the sincerity in their eyes. Equally, if someone seems cold with you, it may be because you forgot to thank them for holding the door open for you.

Holding doors open for people. This suffers from a gendered stereotype, in which men hold doors open for women, and which is annoying. It’s better if people hold doors open for people, i.e. if someone is coming through the door behind you, or coming through the door from the opposite direction. Hold the door open and let them pass. This is tricky if someone is a little way behind: you may feel you should hold the door open for them, but then you stand waiting for them to get there, and they feel obliged to trot quickly to the door that you’re holding. This is embarrassing for everyone, and the best thing to do is to hold the door for a second, then letting go if they are too far away. That way the gesture has been made with fairly minimal awkwardness.

Saying hello and thank you to bus drivers. Apparently this doesn’t happen everywhere. But it’s good - bus drivers are, after all, people. Same goes for waiting staff and shop assistants. There’s nothing worse than having customers look right through you when you speak to them, as if the shoes you are selling (first half of my PhD) are far more important than you are.

The pub. I’ve mentioned this elsewhere, but it’s important - and another thing that I naively assumed was global. But here, drinking with friends in the pub (public house, originally) is the main social activity. We’re getting better at accepting that not everyone drinks alcohol, but I’m afraid that it is not only teenage Brits whose sole intention on a Friday night is to get drunk, also known as shit-faced, plastered, hammered, paralytic (if we can still pronounce it), mashed, smashed, wasted, bladdered, pissed or wrecked. I have found that PhD students are less inclined to this, but if you teach undergraduates, beware. You’ll know which night is Student Night by the state of them the morning after. 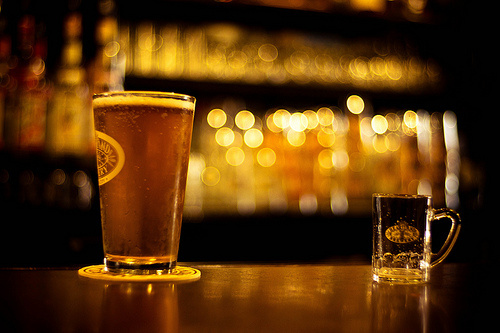 Genaro, ‘I’ll have the small one’ (www.flickr.com). Used under a CC License.

Buying rounds. At the pub. To be honest, I’ve never been sure of the system of buying rounds myself, and spent all my poverty-stricken student years living in fear of it being my round, when there was no way I could afford to buy drinks for all ten people I was with. Actually other students are fairly understanding of this, and if you are in a group larger than five the buying of rounds is likely to disintegrate - after all, *most* of us aren’t going to drink ten pints of beer. At least, PhD students don’t tend to, but again, your undergrads may well have downed ten shots of tequila before your 9am seminar the next day. People appreciate it if you offer to buy a round, but don’t feel pressured if not everyone is doing it. If it is someone’s birthday/PhD submission/viva then definitely buy them a drink.

Talking about money. Understanding as people are about the broke student life, we are otherwise uncomfortable talking about money. Whether it’s your salary or your PhD funding, no one - I repeat, no one - wants to hear what a lot of money you’ve got. It’s fine to say that you’re broke, but not that you’re rich. Best not to ask people about their financial situation either, unless you know them well or everyone is having a very candid conversation.

Losing at sports. We like this. Some may disagree with me, but I reckon that the British have a losing mentality. Our national sports are football, cricket and rugby, and we usually lose at them. If we wanted to win, we would try harder. But actually, just as we are happy to talk about being broke (but not rich), a failure (but not a success), we love nothing more than to have a good moan about our team’s latest sporting collapse. In this we are very different from the US: the American dream is quite alien to our mindset.

The weather. Something else we like to complain about, and for good reason. It sounds melodramatic to say that British weather is terrible, considering that we have one of the most temperate climates on Earth - no tornadoes, hurricanes, tsunamis, earthquakes (we had one about seven years ago and got very excited about it), volcanoes, sandstorms, smog, and not even proper snow. And yet, when you come here you will understand. We complain about the weather because it is a) stupidly unpredictable, and b) really irritating. Our weather runs through its whole pathetic repertoire of drizzle, rain, weak sun, overcast cloud, gusty wind, light fog, sleet and drizzle again about three times a day. If it snows properly (i.e. maybe a metre) we will complain vociferously, declare the roads impassable, and then have a thoroughly enjoyable day at home because there’s no way we can get to work. If it’s actually sunny, we will have a barbecue and get drunk, endlessly discussing whether or not it is about to rain (which it might). So yes, always carry an umbrella.

Class. This is a tricky one. There is a class system in Britain. It doesn’t officially exist, and we don’t officially talk about it. Unofficially, we talk about it all the time. I didn’t even realise how much until international friends pointed it out. There are upper-class, or posh, people. It’s not really OK to be one of them, because it means you are rich and privileged and, as explained earlier, we don’t like that (I am employing some sarcasm here, not actually trying to offend anyone). There are middle-class people, sometimes divided into upper and lower middle-class, and it’s not particularly great to be one of them, as the middle classes are known to be petty, penny-pinching and status-obsessed as well as boring. Then there are working-class people, who are only really admired when they have been to university and made a lot of money and lost most (but not quite all) of their regional accent. So all in all, the class system is not very nice.

I am trying to talk about it with humour because it is otherwise difficult to talk about it directly. Basically, people are probably judged more here by their class (or people’s perceptions of their class) than anything else. Money plays a part, but is not everything: you can be posh but penniless, working-class and rich, although those positions are less common and more complicated. The way you dress, act and speak are the main markers of class. Strong regional accents usually mark someone as working-class, although I’m told that it can be very difficult for international folk to pick up on different accents. It’s hard to explain the appearance markers, and impossible to do so without being offensive, so here are some outright offensive and exaggerated stereotypes courtesy of comedian Harry Enfield: posh, and posh private school (confusingly, sometimes called public school. It’s not public.); middle-class; and working-class.

For international students, I think it’s actually an advantage to not fully understand the class system since you’ll judge people more for who they are. And as an outsider to the system, you won’t be subject to the same class-based judgements. It is worth being aware of all this though, as it can shed light on otherwise inexplicable social situations.

So that’s my hopelessly generalised Guide to the British: please let me know if I’ve missed anything or inadvertently said something unacceptably offensive. I’ll see you down the pub.

Come to think of it, the only place we don’t queue is at the bar.

2 thoughts on “Please Queue Here: A Guide to the British”