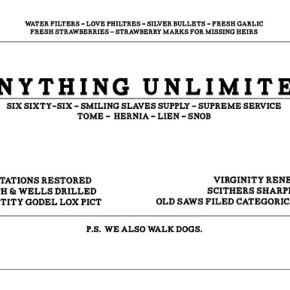 Waitingisfullns/Robert A. Heinlein (www.flickr.com). Used under a CC License.

Perhaps you are looking for an academic job, or looking for a PhD supervisor: Associate Professor sounds good, right? But is that more senior than Assistant Professor? What about Lecturer - or Reader? Does a Reader really just read?

The academic world has always enjoyed its mysterious hierarchies and systems, and you are not alone if you often feel like you’ve missed a basic lesson somewhere along the line. In fact, most of these things are never explained at all, and it is alarmingly easy to get all the way through a PhD and into an academic job without being entirely sure if a Reader is more senior than an Associate Professor.

“Now, what I want is, Facts,” as Mr Gradgrind (one of Charles Dickens’s least loveable characters) would say, “Teach these boys and girls nothing but Facts. Facts alone are wanted in life” (Hard Times p. 1).

So, first fact: the hierarchy of academic jobs varies enormously between countries. If you are looking at jobs or academics outside the UK, look up the status of the role on Wikipedia.

The UK, typically, is a confusing mix of different systems - especially since many universities have started adopting the US system. Please take the infographic below with a pinch of salt - no single university will have all of these job titles, and there may be slight variations of seniority. This is about as clear as it gets! 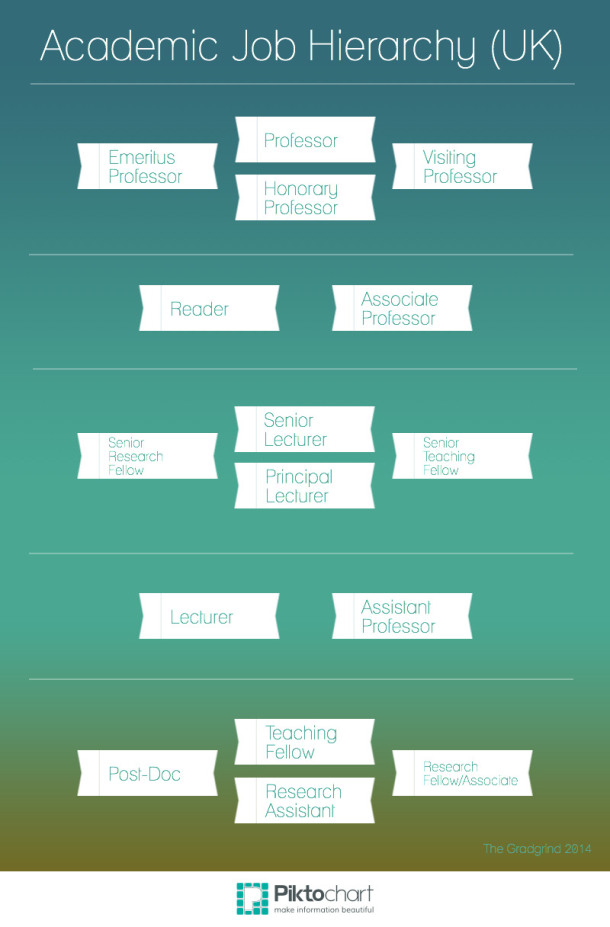 Infographic by The Gradgrind

No wonder we’re confused. The title of Reader is an old one, originating with Oxford and Cambridge, while the Assistant Prof/Associate Prof/Full Prof model is from the US, where a Lecturer is usually below an Assistant Professor. This is not the case in the UK, where the two are equivalent.

Emeritus Professors are retired Professors who still shamble into the library and are wheeled out for the occasional talk. Visiting Professors are from other institutions, visiting under a formal arrangement. Honorary Professors aren’t Professors at all: they are famous folk who have been awarded honorary degrees by the university, entirely for publicity purposes (as far as I can tell). Honorary degrees started out as a way for remarkable people to be recognised by the system regardless of their qualifications; now it’s a bidding war in which universities try to associate themselves with the most impressive celebrity.

The four entry-level jobs at the bottom of the hierarchy tend to be fixed-term contracts, whereas those above are usually permanent positions. A Research Assistant is generally lower in status than a Post-Doc or Teaching/Research Fellow, though not significantly. A post-doctoral position can be as part of a project run by a more senior Principal Investigator, in which case the Post-Doc is not very different from a Research Assistant; however, a Post-Doctoral Researcher may have been awarded funding for their own self-directed project.

Oh, and a Reader doesn’t just read. They teach and write too.

In Ireland an early career lectureship is described as ‘below the bar’, then progressing to Lecturer (above the bar) and then Professor. If anyone knows what or where the bar is, please let us know in the comments!

Finally, we may as well cover all those high-level administrative jobs while we’re at it:

Chancellor: an unpaid, figurehead position. Chancellors are usually powerful and well-connected people who don’t actually participate much in the running of the university, but act as national spokespeople and general speech-makers. Their connections help with securing large donations and managing the university’s brand. Sorry, ‘reputation’. There is sometimes also a Pro-Chancellor, who is a deputy to the Chancellor but otherwise much the same.

Vice-Chancellor: this is the big cheese. Sometimes called a Provost, or more accurately the CEO of a university, the Vice-Chancellor is the one with final power over decision-making. They also tend to be powerful and well-connected, and also make a lot of speeches. However, they usually started out as academics, and receive a salary for their role. Such salaries have been controversially large in recent years.

Pro-Vice-Chancellor: these come in teams, acting as deputies to the VC and each controlling a portfolio of university concerns, so you might get a Pro-VC of Teaching and Student Recruitment, a Pro-VC of Postgraduate and Research, a Pro-VC for the Sciences and one for the Arts, and variations on those lines. They are usually Professors who have been promoted to this level.

Dean of Faculty: again, usually Professors. A Dean will oversee the decision-making in their faculty (Arts, Sciences, Social Sciences, Medicine).

Head of Department: overseeing the nitty-gritty details of each department, in control of departmental budgets, and recruitment of both students and staff.

Registrar: a senior administrative official who, like a Head of Department, is in charge of a section of university administration - for instance, undergraduate records or international student recruitment.

In Scotland there is also the position of Rector, below the Chancellor, and the Vice-Chancellor is often called the Principal. They have a Deputy Principal and the Pro-VC and Vice-Principals.

Enough facts? I think so. Sometimes I wonder if the academic world is deliberately confusing, as a test of our worthiness to be part of it. Unless the Vice-Chancellors are secretly just as baffled as we are…